In some ways, this process is not that different from that of a personal budget. If the income is not sufficient, you have to trim expenses.

At first, you cut the easy stuff - the frills, the expenses that are not core. There is ALWAYS give in Americans' budget - it's a result of a standard of living, even at the margins, that includes nonessentials.

Some different takes on the likely sticking points:

One change that was made a long time ago, in response to Government employees that gamed the system to collect MULTIPLE public pensions, as well as Social Security benefits, was WEP - the Windfall Elimination Profits provision. It was yet another WONDERFUL action by Jimmah Carter, designed to put the screws to people who DARED to find another job, outside of government, after being vested.

It primarily affects 2 groups: military, who often retire after 20 years, and teachers in those states whose paycheck does not take out Social Security (although, they DO pay Medicare taxes). If they then go to work at a job that DOES take out SS, they will be SEVERELY penalized by having their EARNED SS benefits cut by a complicated formula that takes into account their non-SS pension earnings.

No, really. That last suggestion - was perkily suggested to me by a government loon, to whom my answer - do you really expect me to work until 80 years old? - was defensively countered with the admonition that I should not be hostile.

So, after retirement, I will be losing about 1/3 to 1/2 (they can't say just how much before I retire - which makes planning really hard!) of my SS check each month.

It's kind of OK - I will survive, thanks to judicious budget cutting many years ago, and saving in retirement accounts. We learned long ago not to spend up to the hilt, and have kept most of our expenses low. We will be using any windfall money over the next year (IRS refund, final paychecks, etc.) to pay down consumer debt that remains. And, having bucked the trend of divorce, I have a husband with pension, SS, and assets, also.

My thought to reduce the government/business/lobbying industry, with the blatant profiteering by former functionaries:
Ex-employees may NOT choose to forego the pension, and keep that money. It is a limitation that is permanent. 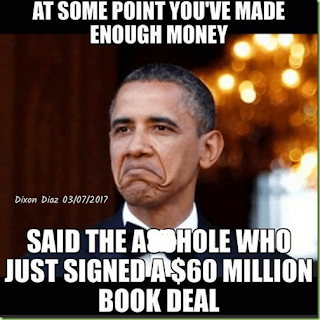 Off-Topic:  If Trump or another non-Progressive had met with the judge beforehand, it would have been considered evidence of collusion. So, why is it OK that the judge who issued the ban on Trump's immigration orders had a meeting with the former President?

Also Off-Topic: I've long followed FoxNews, but I do think it's time to find other sources of information. The Sharp Turn Left is NOT improving its broadcasts.

I always love the arrogance of people who believe that, not only is their position the ONLY one, but that the Plebes better fall into line with it.

News Flash - Conservatives, and non-Progressives, made this network. They can walk away without a qualm. Then, you have to ask yourself, how will you fund the Progressive Agenda?

The current shaky status of cable, which is being put in even greater jeopardy by the unplugging of the TVs, may well find itself in the same situation as Current TV - broke, unwatched, and fast disappearing.

I'm one of many that stream from my Internet connection (I do it through Roku, but there are other ways).