Why is a Wall Important?

Because it's not just a symbolic gesture. 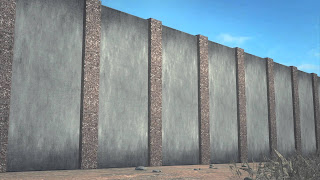 Ergo, it cannot easily be reversed by a Democrat administration in the future, unlike all of the 'changes' that the Executive Branch periodically trots out, in response to pleas from those most affected (border states, crime victims, taxpayers, etc.).

THAT'S why the pro-illegal-immigrant crowd is furious. Because they would find it harder to overcome in their next takeover of the Federal government.

And, because it seems that they are unlikely to grab any of the state government controls in the future. If they can't control the spigot of illegal aliens, they cannot get the votes, or the bodies for their shock troops in the next demonstrations.

The Baby Boomers (BBs) are dying off. I'm not happy about it, as I am one of them. I have reached the point where to hear of the serious illness or impending death of a friend or family member is not a rare event.

I was never a Diehard Radical. I was a sometimes hanger-on, a signer of petitions, occasional marcher, verbal supporter of non-violence, and periodic letter-to-the-editor type.

My friends and family were generally less active than that. I was the 'edgy' one.

I married - to someone very like me. We meandered through jobs and other cities, dipping our toes into the waters of protest, but tepidly - not venturing beyond the shoreline.

Then, I got pregnant. And our lives changed. My husband took over most of the wage-earning. I cared for the baby, and the two that followed. Our time diminished, which meant that boozy evenings talking about politics were pretty much a dim memory.

We didn't go over to the Dark Side - we despised Carter, but voted for Anderson, giving the election to Reagan. We feared the outcome, and, in some ways, it was not great for us, personally.

But, we survived. And so did the Republic. Other elections followed, for me, always voting for the Democrat.

As I was, shortly after, unemployed, I started reading my news from the web. What I found was NOT what I expected.

I was reading about events I knew something about, and finding that the media distorted their reports. I saw protests of the War, and something turned in me. I saw the Left's disdain for the Common Man, the military, and their political opposition. I saw protests that ignored the widespread support for the Bush administration's actions. I saw professional activists profiled by media, in glowing terms.

I saw the lies. I saw the same people who couldn't be bothered to protest Clinton's actions in Bosnia, undertaken without approval of Congress, slam Bush's actions in Iraq and Afghanistan, which were OK'd by Congressional resolution.

I saw hypocrisy in action. By my peeps, the Baby Boomers. And, I started to think for myself.

So, what is the future of the Anti Movement? Well, one part of it will occur naturally - the BBs are dying off. As they die, they reduce the numbers of lifelong anti-everything fanatics, who have seeded the young with the infection of their pathological hatred of their opposition. Already, the numbers of diehard followers has been reduced by fewer going to college. As Trump chips away at the bloated state of entitlements, he will also reduce the number of opponents WHO ARE BEING PAID BY GOVERNMENT TO  ACT AGAINST IT.

Similarly, reduction of the illegal aliens will reduce the numbers who can be persuaded to march for the 'cause'. Those that remain will be employed, for the most part, not lounging around on public benefits.